Happy to be back! And with new Book in tow!!

It has been quite a while (apologies to those who left comments over the past 3 years...when Google took over, I couldn't figure out how to get in!) Just tried again after getting on the forum and am happy to have control of my blog back.

Anyway, in the meantime, I have been continuing to think about evolution and toxicology and what that means for us. It's a big deal. Evolution is relevant in our everyday lives (just think about antibiotic resistance; pesticide and herbicide resistance which even if you don't use, you are impacted because it forces users to increase application rates.) And, though we tend to think of evolution as something that happens over billions or millions of years - we now know it can also happen rapidly. Depending on who's doing the evolving in days, weeks, months or a few years. Not only that but we humans can and do influence evolution of everything from bacteria to plants, bugs, fish, even mammals. This isn't a good thing. At least, not for us.

Any who, the upshot of all of this is a new book! Unnatural Selection: how we are changing life gene by gene is written for anyone interested in the too-often under appreciated downsides of using lots of chemicals. That is, evolution in the pests and pathogens we tend to insist on wiping out! Next up is a book about the solutions. Hopefully in a year or so. 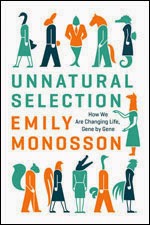