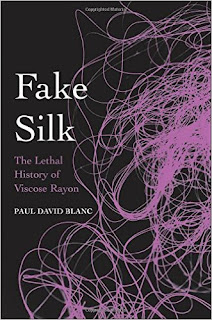 In this slim, action-packed book, Paul David Blanc takes the reader on a historical tour that touches on chemistry, occupational health, and the maneuverings of multinational corporations. Our guide is a small, “elegant” molecule called carbon disulfide—a compound that is a key ingredient in the making of viscose (better known as rayon) and is also insidiously toxic, having devastated the minds and bodies of factory workers for more than a centuryFake Silk: The Lethal History of Viscose Rayon unveils a story that, in Blanc’s words, “deserves to be every bit as familiar as the cautionary tale of asbestos insulation, leaded paint, or the mercury-tainted seafood in Minimata Bay.” Who knew that the fabric that has had its turn on the highfashion runway, as a pop-culture joke (remember leisure suits?), and more recently as a “green” textile had such a dark side?
Rayon is a cellulose-based textile in which fibers from tree trunks and plant stalks are spun together into a soft and absorbent fabric. First patented in England in 1892, viscose-rayon production was firmly established by the American Viscose Company in the United States in 1911. Ten years later, the factory was buzzing with thousands of workers. “Every man, woman, and child who had to be clothed” were once considered potential consumers by ambitious manufacturers.
However, once the silken fibers are formed, carbon disulfide—a highly volatile chemical— is released, filling factory workrooms with fumes that can drive workers insane. Combining accounts from factory records, occupational physician’s reports, journal articles, and interviews with retired workers, Blanc reveals the misery behind the making of this material: depression, weeks in the insane asylum, and in some cases, suicide. Those who were not stricken with neurological symptoms might still succumb to blindness, impotency, and malfunctions of the vascular system and other organs. For each reported case, I could not help but wonder how many others retreated quietly into their disabilities or graves.
Yet, “[a]s their nerves and vessels weakened, the industry they worked for became stronger,” writes Blanc.  In Fake Silk, he exposes an industry that played hardball: implementing duopolies and price-fixing and influencing federal health standards. For more see here. (Though you may need a subscription or library to access the rest.)
Posted by Emily Monosson at 7:19 AM No comments:

An antibiotic alternative? Hope through science.

A toddler suddenly becomes deathly ill. In the ER she is diagnosed with dysentery, caused by a rare but particularly aggressive form of Salmonella. One antibiotic after another fails because the strain, picked up when her family was traveling across parts of Asia, resists multiple antibiotics; but there is an alternative new drug. Like a guided missile, the drug targets only the disease causing Salmonella. Not only that, but as long as Salmonella remains, the drug particles replicate, increasing in number until the infection subsides. Despite the carnage, the toddler’s gut microbiome remains unharmed – no need for probiotics or fear of complications like C. diff.  If Salmonella responds by evolving resistance, the drug may respond in turn engaging an ages old evolutionary dance. By the next morning the color returns to her cheeks. By evening, she is cured.
While still a fantasy here is the U.S., the scenario has been playing out in Eastern European hospitals and clinics for nearly a century. The “new” drug is a virus called a bacteriophage (or simply “phage”), that attacks bacteria. It is a cure nearly as old as life; at least as old as bacteria. Microbiologists have suggested that for every strain of bacteria on earth from the oceans to those populating our own microbiomes– there is at least one, if not multiple bacteriophages.

As diseases like TB, gonorrhea, E.coli, staph and other common infections increasingly evolve to resist our antibiotics, health care workers are fast becoming desperate for new antimicrobials that are both effective and cause minimal damage to our own microbiomes. Bacteriophages are potent antimicrobials. Once disparaged here in the U.S. and in western medicine in general, these bacteria infecting viruses are making their way back into academic and biotech laboratories. If all goes well, they may be coming to a pharmacy near you.
We now know that throughout our existence viruses have woven in and out of life – leaving their stamp on most if not all living things. By some accounts up to eight percent of our genetic material came to us by way of viruses. Yet for all the fear and harm we associate with viruses many (if not most) are phages, infecting bacteria, like those in our microbiome. Genomics is just beginning to reveal the diversity and representations of these entities in nature and within our bodies. But the role that phages can serve as potent antimicrobials is no mystery. As infectious agents of bacteria they are a normal and pervasive component of earth’s flora, and they have already saved countless lives. One day they just might save us or our loved ones.
This is only one solution. There are plenty of others in the works. Lets just hope they get the funding they need in the coming years.
Adapted from  Natural Defense: enlisting bugs and germs to protect food and health (Island Press, Spring 2017.)
Posted by Emily Monosson at 11:33 AM No comments: